It turns out that one of the biggest obstacles to having a good workout is just getting through the gym’s front door. Now I don’t mean this in a motivational or philosophical sense – I mean literally having a gym employee remember to get out of bed in the morning and go unlock the front door.

Over the course of my fitness career, I’ve seen dozens of gym parking lots fill up with restless and angry members, regardless of the city or the brand. In fact, I belong to more than one gym, in part so I can escape fiascos like the one I came across today.

Given all the ways gyms try to entice people to join, I think I’d start my own franchise with an access guarantee and the most basic of slogans: “We open on time.” (I should also mention my idea for a gym in Washington D.C. near the U.S. Capitol called, “The House of Reps.”)

In any event, whenever my workout gets sidetracked by a gym’s deadbolt, I often consider trashing them on the Internet, either lighting them up on Twitter or naming names on this blog. But in reality, I don’t think damaging their business helps me in the long run. In point of fact, I need all my gyms to stay open, so that one of them does indeed remain open.

For the past few years I’ve participated in an annual 5K run sponsored by a nearby town. Since the course is the same each year, I use the race as an annual benchmark of my level of fitness. I’ve also experimented with listening to music during the race, taking into account issues of etiquette, safety, and whether it’s even desirable to tune out the event. I can report that whatever the drawbacks, earphones will indeed help you go much faster.

The race organizers do a nice job at the starting line trying to separate the faster runners from the slower folks. Several large signs clearly indicate where you’re supposed to stand based on your typical pace per mile. Each group goes off in a staggered start separated by a minute or so.

Although this athletic honor system should help streamline the race, the whole arrangement breaks down under actual event conditions. Pumped full of pre-race adrenaline, people who have never run three miles in less than 30 minutes conclude they’re going to streak down the course at an eight minute pace. Likewise, you have folks with no conditioning at all that decide to accompany their more fitness-oriented spouse or relative at the starting line.

Everything would be fine if these people, totally gassed by 1,000 meters, drifted off towards the sidewalk in a courteous and controlled fashion. Unfortunately for the rest of us, they crash suddenly and stop right in your path. For those of us in the third or fourth wave of runners, the first half of the race is most notable for its frequent collisions and for weaving around the widespread traffic jams. In fact, the beginning of the race encapsulates everything wrong with the state of fitness today: People with unrealistic expectations starting too fast, burning themselves out, all while getting in the way of folks trying to train seriously.

There’s also fun to be had at the water stations at miles one and two of the course. Now, I imagine the race organizers set up these stations only for liability purposes or because it’s required by some county code. As a practical matter, do you really need to suck down a pint of water nine minutes into your jog? I’m serious – are people normally crazy with thirst after four laps around a track? I know that I haven’t even started to sweat yet at this point in my workout. Regardless, runners swarm the the tables and fling their empty cups all over the road. In particular, I like watching the guys who grab a cup of water in each hand and pour it over their heads, like they’re heading into the final stage of a triathlon.

I’ve been critical in the past of personal trainers, wondering exactly what physical benefits a client gets from the relationship, and whether either the physical or psychic benefits are worth the cost. But until today, I’ve never been able to compare side-by-side, minute by minute, my free workout – built only of motivation and common sense – against the workout designed by a (presumably) credentialed professional.

This morning, I began my 3 mile (12 lap) jog at a local high school track just as 20 participants arrived for a fitness “Boot Camp.” (I’m guessing $25 per person?) The trainer had the group drop their armfuls of pads and mats and water bottles right in front of the home side bleachers. As a result, as I swung around the track, I could get a snapshot every couple minutes of Boot Camp activities. Here is how our workouts stacked up against each other:

So I guess it’s time to acknowledge that the wheels have come off the Arnold Schwarzenegger bus. I was all set to write a post about the irresistible attraction of literally the world’s biggest alpha male. But then pictures surfaced, and pundits began discussing the impact of steroids on libido, and Arnold’s raging insecurities, and character flaws uncovered by opposition research. With the Internet awash in prurience, I was inspired by an article that decided to remember happier times – a recap of the Top 5 Arnold movies. I thought I could make my own contribution with an analysis of the Top 3 muscle moments in Arnold’s movie career. So without further ado (and not a moment too soon):

#3: The handshake in Predator 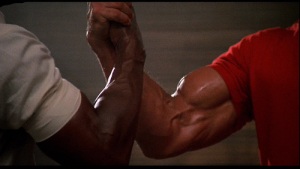 This scene was actually a 2-for-1, with Rocky legend Carl Weathers (Apollo Creed) on the other end of that monster grip. Arnold has said that he always filmed his muscle scenes first on any project because maintaining his conditioning on set was so difficult. I imagine they shot this scene on day one.

The movie Twins was full of gratuitous disrobing by Arnold. But 20+ inch arms remain an impressive thing regardless of the marketing. I remember thinking at age 15 that it was pretty cool to be able to tear apart the sleeve of your shirt by flexing your bicep – and I still do today.

#1: Opening scene of The Terminator

Only organic material can travel through time, so Arnold always appears in his birthday suit at the beginning of the Terminator films. In 1984, when the first Terminator was released, Schwarzenegger had just embarked on his film career and was only four years removed from his 1980 Mr. Olympia title. He was still able to show off his perfect v-taper, with his massive traps, shoulders and lats. Radio personality Howard Stern once asked Arnold on his show if shooting these opening scenes ever bothered him, with the full production crew watching, and given the rumors about the “undesirable” effects of long term steroid use. In response, the Terminator said simply: “There is nothing small on Arnold Schwarzenegger.”

I came across this charming article by a guy contemplating the experience of turning 70. He suggests that, having made it this far, you’re starting to play with the house’s money. Since discipline and regimen have served their purpose, why not bring on the “red meat and dry martinis?”

I appreciate the sentiment, but would like to recommend a different indulgence: The Reese’s Peanut Butter Chocolate Cake Cheesecake from The Cheesecake Factory.

Menu labeling laws in my area have stripped from The Cheesecake Factory any of the restaurant’s remaining modesty. Even the desserts in the display case are exposed. During a recent visit, I was admiring through the display case glass a particularly tempting cheesecake, and noticed a small decal nearby. It said simply: 1550 calories. I asked the hostess about this 1550 – is that per slice or the whole cake? No sorry, that’s just one slice.

If you dig into desserts the way I do, then just one forkful of this cheesecake has 150 calories – the energy equivalent of about 11 minutes on the treadmill. (Three bites cancels out an entire workout!) And since each cake is pre-sliced into 12 pieces, there’s no escaping the math – one cake equals over 18,000 calories. If you consume a typical number of calories in a day, you could maintain your usual intake for more than a week eating your way through just this one confection.

I’d note that the display case at this restaurant features 24 cakes, a collection that in total approaches something like a half-million calories. The restaurant might as well hang up two sides of beef for their display instead. Seriously, you can look it up – an entire cow yields about 500,000 calories.